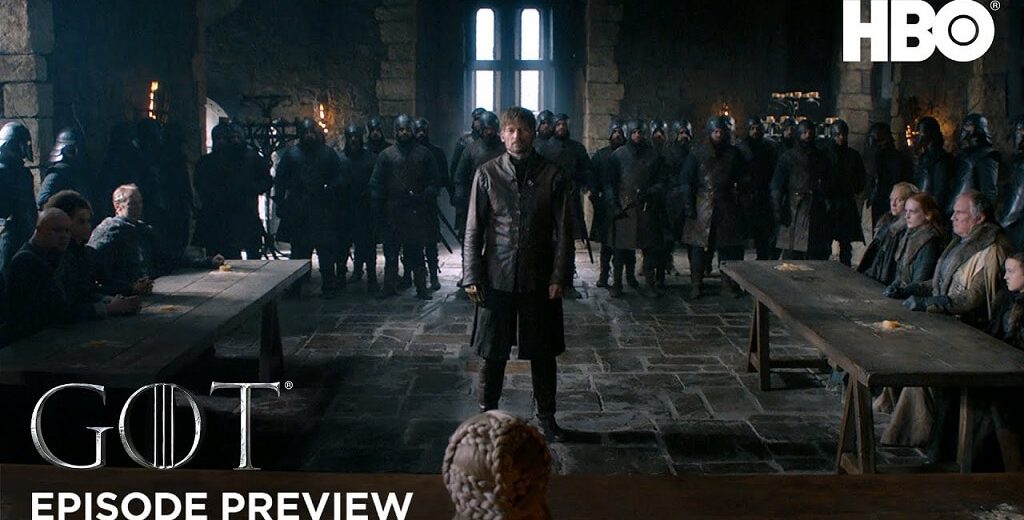 On a related note, it is beyond me how people managed to miss out on the first episode with services like AT&T TV. The much-awaited first episode titled Winterfell involved a return to familiar settings.

It was not about battles and fight scenes, but about awkward reunions. And it set the stage for Episode 2 with a jaw-dropping trailer at the end.

The Build Up to GOT Season 8 Episode 2

Here’s a brief recap of what happens in Episode 1. Arya reunites with Gendry and Jon Snow in Winterfell, unsheathing her weapons in peace to show her friends.

Tyrion and Sansa set eyes on each other for the first time since Joffery’s assassination/wedding. The reunion is warm but marred by Sansa scoffing at Tyrion’s hope that Cersei would do the right thing.

Theon rescues his sister Yara Geryjoy from their uncle Euron, who now sits as the ruler of the Iron Islands. Euron gets intimate with Cersei when he brings her what’s left of the Golden Company.

In the North, Jon Snow gives up the crown and faces the ire of his liege lords. But he manages to convince them of the wisdom of bending the knee to Daenerys Targaryen. It was a choice between returning to Winterfell with powerful allies or empty-handed. We also see Jon (or Aegon Targaryen to be correct) go on his first dragon flight.

So now we know who rides the third dragon, other than the Night King and Daenerys herself. Jon also learns of his true parentage from his friend Sam, who learned it from Bran.

At the end of the episode, Jaime Lannister shows up at Winterfell, coming face to face with Bran. Bran, if you remember, is paralyzed from the waist down since the first episode. Why? Because Jaime casually pushed him out of a tower window.

Even further North, Beric, and Tormund have a close encounter with the Nights Watch turned into wights. At the very end of the episode, Spectrum TV subscribers rejoiced as a trailer for Season 2 dropped.

This has got us all tingling with anticipation. It looks like the show will change gears in episode 2.

Things aren’t looking too good for the Kingslayer in the trailer for episode 2. The first scene opens with Jaime Lannister standing before the lords and ladies of Winterfell, including Daenerys.

Daenerys tells Jaime how her brother told her stories about the man who had killed their father. She chillingly adds they also discussed what they would do to him. Jaime sees Bran for the first time since he pushed him out a window and paralyzed him. All this on top of Cersei going back on her promise to help fight the White Walkers.

Will they feed Jaime to the dragons? Will there be a trial by combat? Watch the next episode to find out.

The trailer gives us a closer look at the tensions brewing between Sansa and Daenerys. Sansa does not seem to like Dany and seems to be vying for Cersei for the title of Ice Queen.

Daenerys tells Sansa she should never have trusted Cersei Lannister. Sansa replies in the same tone that neither should have Daenerys. Will tensions come to a head between the two strong women? Find out in the next episode.

Jon Snow has always been a fan favorite. Or should we call him Aegon Targaryen now that he knows all about his true parentage? Anyway, he now knows he is the legitimate heir to the Iron Throne.

His mother Lyanna Stark was married to Prince Rhaegar Targaryen, making him Daenerys’ nephew. How will this unfold? After all, Jon bent the knee to Daenerys, offering his allegiance.

On the other hand, his claim to the Iron Throne is stronger than hers. It will be interesting to see how this plays out in the next episode.

We see soldiers and preparations underway for the final battle against the Night King and his White Walkers. Tormund arrives at Winterfell, and Jon asks him how much time they have left.

Of course, he means how long until the Night King’s armies arrive at Winterfell. Chillingly, Tormund replies they have before the sun comes up tomorrow.

The trailer closes with Tyrion looking over the highest battlements of Winterfell. Be sure to stay tuned on your Comcast TV connection next week to know what he’s looking at. My bet is an army of White Walkers.

Others anticipate dragon on dragon action as the Night King, Daenerys and Jon take to the skies for battle. What will we see in episode 2? Find out next week on HBO.