How to Keep Your Jeep Running Forever 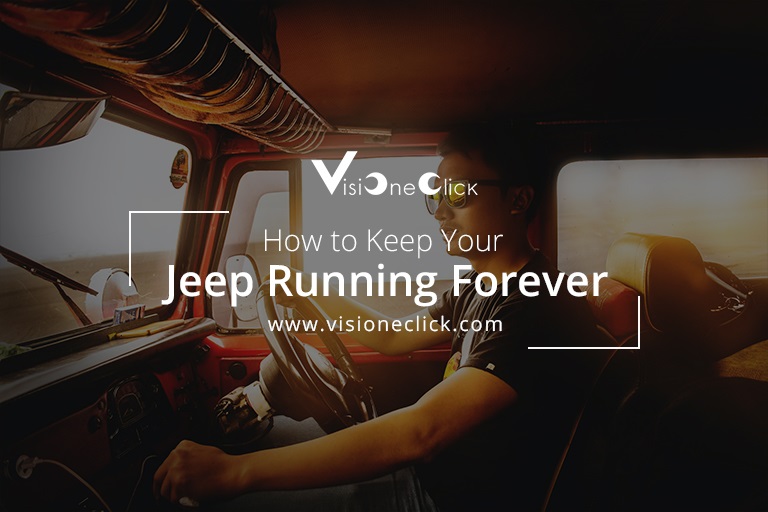 Nothing says rugged like Jeep! The name is synonymous with a very specific type of vehicle. One built for durability, function, and rough terrains. Jeep offers a number of vehicles starting with the early Vintage Willys jeeps in World War 2. But the most iconic and longstanding vehicle that Jeep has produced is still the Wrangler. The Wrangler is one of the most versatile 4X4 vehicles ever. It has proven its mettle on all types of terrains, from icy tundras to dry deserts. The Wrangler is a no-nonsense, mean-looking machine that has been part of American culture for many decades.

The strong frame and burly look, however, does not mean that your Wrangler is indestructible. Yes, it is very, very tough. But even the toughest machines can break under improper handling and maintenance. A properly maintained Jeep Wrangler, with the right truck accessories, can take you all around the equator (barring open seas) if the need arises. But a poorly maintained Wrangler will only put you in jeopardy. Especially if you’re trying to put your Jeep through miles of remote and rough terrain. Yes, breakdowns can still happen at any time based on any number of reasons. But the following tips can help you make the most of your Jeep Wrangler and still keep it running forever:

Cut Down on Unnecessary Driving

As counterintuitive as it may sound, the best thing you can do to keep your Jeep or truck running forever…is to run it less. It’s simple actually. The more you run your vehicle, the more the different parts of it have to work. Since moving parts will eventually become damaged after prolonged use, you can extend your car’s life by foregoing any unnecessary drives. If you have to go two blocks down to grab some food, why not walk? Give your Jeep or truck garage time, especially in the winters. Cold weather means the engine is going to take longer to warm up, among many other factors. For older vehicles, it would be best to garage in the cold season.

Avoid Having a Heavy Foot On The Gas

If you’re still having dreams about roaring through quiet city streets and raising hell downtown, please stop. You’re not only going to get into trouble, but you’re also going to be obnoxious. Reckless driving endangers both you as well as other vehicles or pedestrians. Most states have severe penalties for speeding, and particularly bad or repeated infractions could even result in jail time. And in any case, gunning your engine for no reason is a surefire way of wearing it down. Not to mention the added guzzling from that big engine. Go easy, go safe, and go further.

This should be common knowledge, whether you own a Jeep or a truck, or even a minivan. The engine is, to use a cliché, the heart of any automobile. Just as humans need healthy hearts to live, vehicles need healthy engines to perform reliably. That means giving the engine particular attention when it comes to oil changes and replacing fluids. The single most irresponsible thing a Jeep owner can do is neglect to get an oil change after the recommended threshold. Engines consist of sophisticated moving parts that need constant lubrication. Otherwise, you’re setting yourself up for a nasty and unexpected breakdown. In very bad cases, you could even end up with a seized engine.

Remove Heavy Objects When Not Needed

Do you drive a work truck? If so, you are allowed to keep heavy objects such as road tools or lawn equipment on the bed at all times. But if you don’t drive a 4X4 for heavy work, you should pay attention to the load you put on it. Extremely heavy loads, especially for extended periods, can damage your Jeep in several ways. For one thing, your suspension will suffer. The wear on your tires will increase too. The engine will have to work harder than usual, which means the wear will increase at a faster rate. And if nothing else cuts it for you, you will be guzzling a lot more fuel than you need to.

We have grown too used to electronic instrument clusters and computer diagnostics. The oldest and surest way of making sure your engine is okay is to listen to it when your Jeep is running. Hear a strange noise that wasn’t there before? More often than not, it could be because something is wrong with the engine. While you shouldn’t let it proceed so far, the louder the noise gets, the more likely an expensive breakdown is on its way. So err on the side of caution, and get the engine checked as soon as possible. Fixing a smaller problem now can prevent it from turning into a bigger problem later.

Find the Right Mechanic and Parts

Finally, the most essential ingredient. A lot of people like to tinker with engines and parts to get the most performance out of their Jeep. That is great, especially if you have mechanical experience and are not particularly worried about insurance. But for most of us, a Jeep is too complex and sophisticated, which is why you should look around for a good local mechanic and an authorized parts dealer.

If you’re setting up your vehicle for a specific task, such as a desert rally or a snow safari, you will probably need more specialized parts. Many of these, such as toughened suspension and offroad lighting, are usually not part of your average dealership’s inventory. However, thanks to the internet and shipping industry, you can get aftermarket parts, including some excellent ones from Rough Country Canada, delivered right to your door. Just make sure you’re getting the right parts, as return shipping can be a hassle.