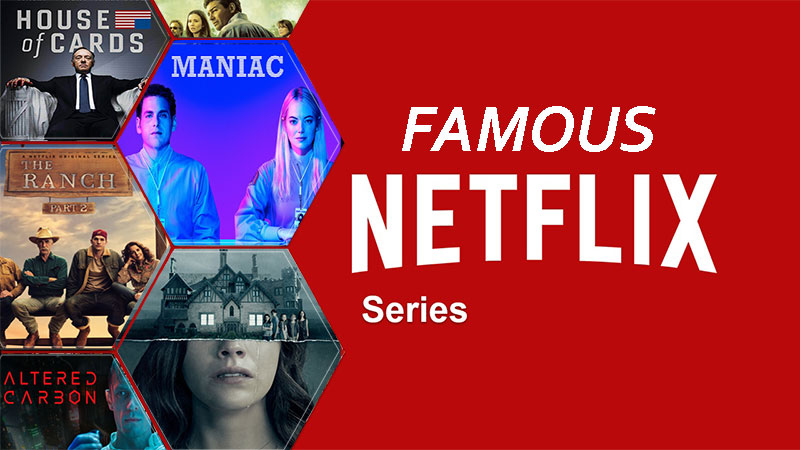 A mantra I live by. While many of us want every other night to be a ‘Netflix and Chill’ kinda night, the truth is that we can only afford to do so on weekends. And that too, not every weekend night. Well, there is nothing much that we can do about this here. And instead of whining, I would like to take this opportunity to introduce you all to the most famous Netflix original in your state. But first, look at the following stats about the giant that is providing thousands of people across the world with the ultimate form of entertainment.

Netflix is providing entertainment to many people across the globe. However, the fact is that the United States still remains the largest market that makes use of this service. If we have a look at some of the American based stats then:[1]

What once started as a DVD rental service in 1998 is now an entertainment giant that not only features licensed content but has many originals to its name as well.

Some of the key Netflix statistics that you should be aware of include: [2]

To give you a better picture of the viewership that Netflix has, the following couple of graphs will help you do so.

We won’t just discuss the Netflix original that was most watched in this state in the year 2018 alone. But we will also have a look at the years before that.

So, in the year 2018, ‘Lost in Space’ was the most watched Netflix original series in Colorado. People have varied reviews when it comes to ‘Lost in Space.’ But the fact that it ranked at number one in 8 states tells that the show had an interesting story to narrate.

It is a ten-episode show that only has a single season released. Some viewers debate that the ten episodes could easily be condensed into a two-hour movie.

In contrast, others appreciate the acting expertise that famous actors like Parker Posey and Molly Parker displayed. Also, people appreciated the new story for the robot that they got to see in this season.

This was the most watched Netflix original in Colorado in the year 2016. It is a Netflix original comedy that gave ‘That 70s Show’ stars Ashton Kutcher and Danny Masterson a chance to share a screen once again. The show features coarse language, characters that have depth and emotions that are real.

It was the most famous show among the masses in Colorado in the year 2015. It is indeed an intriguing show that involves suspense and drama. Each hour-long episode involves large-scale crime and loads of family drama. No doubt, the show keeps one’s eyes glued to the screen.

It was the most famous Netflix original in the state of Oklahoma in the year 2018. Altered Carbon is an adaptation of a 2002 novel by the same name. The show belongs to the Sci-Fi genre and makes one dizzy at times. It features the story of a 22nd-century mercenary who’s hired to solve the murder mystery surrounding an influential aristocrat.

If you think that the story sounds no different than any other murder mystery, wait till you learn about the catch. The said aristocrat is still alive in the show. Because according to him the rich can never die.

Instead, their consciousness gets uploaded in the clouds and downloaded into new bodies. The ten-episode season does not only revolve around mystery but includes its own chunks of romance and social stratification as well.

However, the story might take a couple of episodes to take-off but it is worth sticking around.

The Haunting of Hill House

It was a popular choice among the people of Wisconsin in 2018. Debuting around Halloween, this show is an adaptation of Shirley Jackson’s famous horror novel released in 1959.

It is one of the spooky offerings by Netflix but one that did justice to the novel as well. Normally, the adapted movies and shows do not do justice to the original novels. But The Haunting of Hill House did not disappoint.

It is for this reason, that in the year 2018, the show was famous in around 22 states in the USA. The credit goes to the creator Mike Flanagan, who came up with this idea and gave the viewers an interesting watch.

What makes the show all the more interesting is the fact that the plot swings between the past and the present. The realistic looking ghosts and other characters make one wish that the scary freaks do not jump out of the screen.

House of Cards is a political drama that grabs the interest of the viewer from the very first episode. The fact that this was Netflix’s first original program is surprising as it is also the one that is the most addictive. This series provides a sneak-peek into the dark lives that the power players who run DC live.

This show will always have to its credit the launching of streaming revolution. And for many, it also made understanding the American constitution and the dirty political game easy.

Georgia, along with a couple of other states supported Maniac in the year 2018. As the name suggests, you cannot expect Maniac to be a show that talks about sanity. If you watch the season, you will learn that this is indeed the case. The story revolves around two emotionally damaged strangers- Emma Stone and Jonah Hill.

These two strangers enter a rather strange experimental drug program. They do so in their struggle to seek solace from their psyche selves. When they enter the program, they indulge in fantastical situations. This gives them a chance to face down their fears. However, things do not go as planned. Tune into the season as interesting events unroll.

As compared to 2018, in the year 2016, Georgians had a rather emotional pick as their favorite – Love. This show is a slow-motion dissection of a love story. The two flawed and complex individuals fall in love with each other. If described properly, the two lovers are useless, loveless and directionless. Brutal but true.

The two decide to enter a relationship that, to many, does not seem practical at all. Because both of them are clueless and directionless individuals.

This was Georgian’s choice of the most famous show in the year 2015. And the people of this state chose Marco Polo as their favorite show in the year 2014. Well, the Georgians’ choice might be frowned upon here. Because anyone who is a true history fan would know that this show was a bit disappointing. And made the viewers fall asleep just like the history class instructor did.

If your state did not make it to the above list of a detailed look into the shows that various states liked in the past couple of years, here’s a comprehensive table for you.

The following table includes all the states of America. And the famous Netflix original series in these states in 2018.