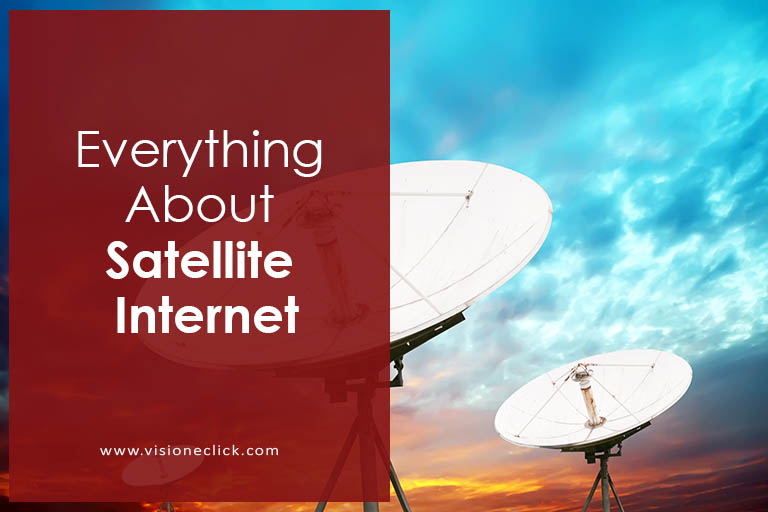 You may have access to some of the top cable and fiber internet providers of the country. And even have access to speed tiers as high as 1000 Mbps. But this doesn’t change the fact that a number of American residents, especially North Americans have two choices only when it comes to internet subscriptions. Dial-up or satellite!

Dial-up internet is way too archaic and unreliable. Therefore, the only option that is there is satellite internet. Also, there are only a handful of good satellite internet providers in the country. So, you have a limited choice in providers, plans, and speed tiers.

Let’s know all about satellite internet.

What is Satellite Internet?

As the name indicates, a satellite out there in the space sends internet signals for this type of internet to work. While surfing the internet, you will encounter two main problems with satellite internet.

You can overcome the latter by paying a steeper price to gain extra bandwidth. But when it comes to the satellite technology, subduing speed of light and whopping distance is not possible. Whether you are streaming, video calling, or gaming, you will be plagued by delay and latency.

Satellite internet providers are perhaps the stingiest when it comes to data caps. But somehow, it is understandable too. An entire continent is sharing the bandwidth emanated from a handful of geostationary satellites!

The Distance is a Major Problem

We have already established that satellite internet works with a satellite orbiting somewhere in the heavens. This fact is inescapable that receiving and sending data via an orbiting satellite in space follows an incredibly long distance. Let’s recall a bit of your middle school science. A geostationary orbit is around 22,235 miles away in the space where the satellite is orbiting. Now understand the problem. Light travels at the speed of 186,000 miles per second.

Your data is supposed to travel from your dish to satellite and back to the ISP server before it accesses the web. Your data will then take the same distance in reverse. These two ricochets alone are over 89,000 miles. Now calculate the latency. It comes out to be 0.48 of a second. So, next time when you ask this question, “is satellite internet good?”, think about this lag wreaking havoc on interactive apps and sites. This interval is the reason for all the latency and lag-related concerns associated with satellite internet.

The Importance of Strong Signal Strength

The signal strength is very important for the satellite internet. Greater wattage translates to better performance. And by performance, firstly we mean speed. And secondly, its performance during adverse weather conditions. For instance, rain, cloudbursts, smoke, blizzards, sandstorms, and so on.

These environmental conditions can attenuate satellite signals. Strong signal strength will help in avoiding loss of connection. While shopping for an ODU, make sure you invest in a high wattage BUC available.

In addition, you need a bigger dish. The dish points to the sky according to the longitudinal plane of the orbit of the satellite. If you are residing in North America, your dish needs a clear LoS or line of sight to the southern sky. That’s where the satellite is orbiting.

Obstructions like foliage, buildings, and shrubbery can attenuate satellite’s signals to the dish. Now that you know how satellite internet works, you should be full of praise for how innovative the other types of internet are!

You might be wondering, how much is satellite internet. There are only two satellite internet providers in the United States, namely, Viasat, and HughesNet. The average price of a HughesNet plan is $94.99 a month. While that of a Viasat’s plan is $102.86 a month.

A satellite internet plan’s average cost in the country is about $100 a month. That’s a lot! Especially when compared to its more innovative and speedy counterparts, fiber and cable plans. For these two plans, the average price is around $50 a month! The only upside is that the satellite internet is available anywhere in the country, and the plan prices are also consistent. Whereas, the pricing of fiber and cable internet vary from place to place. Viasat is a little pricier than HughesNet, but the offered speeds tend to be higher.

The offered average speed of a satellite internet plan is around 31 Mbps. FCC considers the speed of 25 Mbps as broadband. Therefore, even if it doesn’t seem very fast, it is pretty decent. However, if you hail from a big family who’s into streaming and gaming, then the speed may lag.

For everyday tasks, this is plenty of speed. Viasat offers speeds up to as much as 100 Mbps. The plans are a little pricier than HughesNet. But if you can’t compromise on the speed, you should go for it. Wi-Fi on Satellite Internet performs better with higher speeds.

The speeds range from 30 to 100 Mbps according to the plan you choose – both are pretty decent.

– Is satellite internet good for gaming?

You can game with satellite internet. For some video games, however, latency could be a problem.

– What is the best satellite internet?

HughesNet is a more affordable provider. But for those who want high speeds, Viasat is a viable option.

– Can I get satellite internet for my RV?

Yes, you can get satellite internet for your RV.