The Role of Mass Media in Global Warming 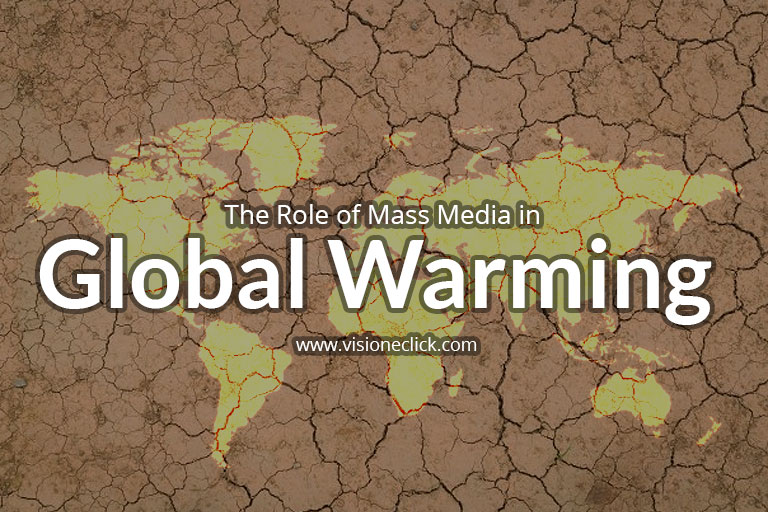 Mass media play a remarkable role in global warming because people rely on the media for getting climate change information along with their daily fix of politics and culture. But to what length can we rely on daily news when it comes to covering scientific climate change topics?

There has been a sharp shift in corresponding climate science during the last decades. Electronic media has jumped from hardly accurate to almost precise coverage when it comes to presenting facts about global temperatures and extreme weather. Because the majority of people get their information from the press, it’s more important than ever that the press will share scientifically accurate material.

The scientific consensus on climate change and its human cause are agreed amongst 97-99% of scientists worldwide. Multiple studies show that human activities are the primary cause of the warmer climate trend over the past century.

We learn at school that the natural environment and climate are interdependent, which means that a small shift in one ecosystem will affect the ones next to it. For example, CO2 emission is causing the greenhouse effect, which is causing temperature and sea-level rise. There are many other resulting topics on global warming at StudyDriver to take note of in order to comprehend the magnitude of the situation.

While these facts are widely known, a lot of people are still confused about the reasons behind the increasing weather crisis. Some people even ask, “When will climate change stop?”. The good news is, there are steps to prevent global warming. Preventing the next big natural crisis starts with adequate education on climate action. Naturally, the media plays a big role in communicating knowledge to the masses.

A long study encompassing press coverage of climate science from 1988 to 2002 found that only 35 percent reflected the scientific discourse accurately. Media can influence public opinion remarkably and communication experts are discussing how big is the role of mass media in understanding climate science. Have we been given accurate facts and impactful solutions?

This has caused confusion because not all articles will meet scientific consensus on the facts provided. For example, only 0.1% of articles studied by climate scientist David Romps mentioned CO2 as the main reason for creating the greenhouse effect and warming of the planet. Consequently, many readers confuse the effects of CO2 with the ozone hole or think that warming is due to the heat produced by burning oil and gas.

But critique has been heard and a recent study encompassing articles from 2005 to 2019 found that 90 percent of articles cover scientific consensus accurately. This is a sharp change from the last comparable study we looked at. Thanks to fast media reflections, about 64 percent of Americans now say that reducing the effects of climate change is “a top priority”. Five years ago, this percentage was less than 40.

As climate change affects all of us, people want to know how they can help to minimize the negative impact. Public understanding vouches for consuming less, swapping to CO2-neutral electronics, and planting trees. Climate scientists assure that if everyone pulls the same cord, it is possible to make a change.

“We are not going to make the progress we need until everyone from both political parties, from rural and urban areas, from all states, accept the fact that global warming is happening, it is caused by us. These are the basic facts that climate scientists and policymakers know, but somehow the broader public does not quite appreciate yet,” says climate scientist David Romps from the University of California.

A valuable lesson we’ve learned throughout history is the importance of education and free information. Information will cultivate discussing solutions and building communities.

While people are given accurate facts about science covering climate, it’s possible to take on precautions for mitigating the consequences.

The rule of thumb here would be to double-check any statistics and details provided. With the widespread internet, it’s easier than ever to conduct your own research and look for different sources of information.

Various studies throughout the last decades show that the public gathers much of their knowledge on global warming from the daily press. This creates a difficult situation because not all media will present checked and adequate facts. Therefore, the mainstream understanding of certain scientific topics could become distorted.

Due to the urgent nature of the climate crisis, mass media has made a sharp shift in presenting real facts to their readers. The role of the media in understanding and tackling global warming is remarkable. It’s also up to readers to keep a healthy dose of criticism and double-check the facts.