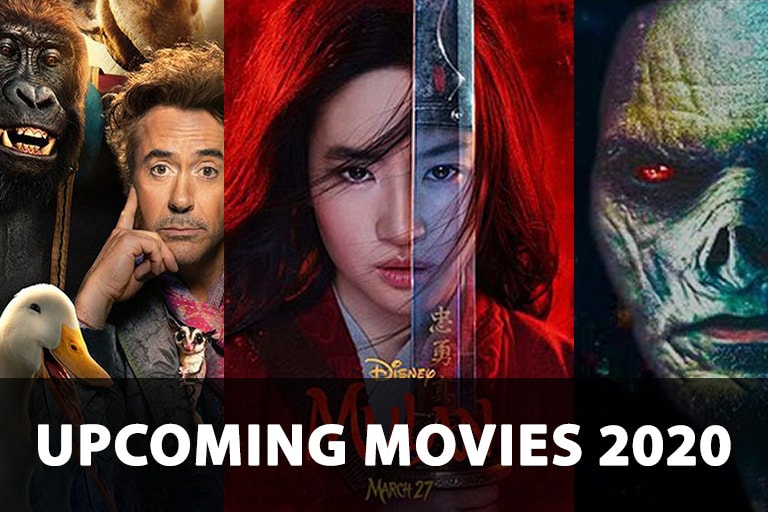 2020 will be another year when cinemas will be flooded with sequels, prequels, and new additions to the world of comic films. The list of upcoming movies will make some nostalgic because of the prequels they watched as kids and some will express anger over the weak plot of a movie.

Here’s a list of all the movies that are going to hit a cinema near you in 2020.

Many new movies are coming out in 2020. From horror movies to funny ones, there is a long list. However, some of the most prominent names include:

Whenever one hears about the Marvel comics assuming the shape of a movie, it just excites them. Eternals is another superhero film from the Marvel comics that is set to release on November 6, 2020, in the States. Starring Angelina Jolie, Kumail Nanjiani, Salma Hayek and Richard Madden the story will revolve around the immortal alien race, The Eternals.

And how they fight to protect humanity from the evil counterparts.

A fantasy film, Godzilla vs. Kong, is set to release on March 13, 2020, in the States. The release of this movie will mark the 36th movie in the Godzilla franchise. It will also be the 12th film in the King Kong franchise and the 4th film featuring Godzilla that is produced completely by a Hollywood studio.

It is one of the most anticipated upcoming movies for Godzilla fans and stars Rebecca Hall, Kyle Chandler, Jessica Henwick and Brian Tyree Henry. Get excited to watch Godzilla and Kong fight against each other on a big screen.

Starring Dwayne Johnson, Ryan Reynolds, and Gal Gadot, Red Notice is set to hit the big screens on June 12, 2020. The plot of the movie revolves around a man who works in an international police agency. There are eight Interpol notices, amongst which Red Notice is the most serious. It concerns the arrest of the criminals that the notice states as ‘wanted.’ It will be an action-comedy movie.

The trailer for the movie is still not out just like many new movies coming out in 2020 haven’t released one.

Starring Ryan Reynolds, Free Guy is a Sci-Fi movie with a blend of action and comedy as well. It will release on July 3, 2020. Ryan Reynolds plays the role of a bank teller in the movie who realizes that he is a background character in a game. It also comes to his knowledge that the game will soon go offline. Watch what Ryan does and how the events unfold in his favor or against him.

The trailer is not out yet but you can expect one to be released by the end of this year.

No Time to Die

The release of No Time to Die will mark the 25th installment in the James Bond series. The film stars Daniel Craig who will now have to name five movies as an MI6 agent James Bond. Get ready to book a seat for yourself in a cinema near you on April 8, 2020. The story revolves around Bond’s life after he quits active service. However, his friend asks of his help to look for a missing scientist for him.

Hit the cinema in April to see how the exciting events unroll in this thriller.

The Devil All the Time

Starring Robert Pattison, Tom Holland, Jason Clarke, and Harry Meling, The Devil All the Time is set to release on Netflix in 2020. It is a psychological thriller movie that is based on the novel with the same name. The film is set in Ohio somewhere in the 1960s after World War II. It throws light on how the war affected the mental health of many people. Thus, making it an interesting upcoming movie to wait for.

Trailer is still not out as yet.

Death on the Nile

Death on the Nile is an upcoming drama film that is based on the novel by Agatha Christie with the same name. The film is a sequel to the movie released in 2017 by the name Murder on the Orient Express. The cast for the movie includes Gal Gadot, Armie Hammer, and Russel Brand.

It is set to release in the States on October 9, 2020. The story of the movie revolves around the hunt for a killer by Hercule Poirot while he is on a holiday in Egypt.

Add another film to the superhero category if you are a fan of such movies. No, it is not a Captain Marvel movie, but it is from the comics that you read as kids. Bloodshot will hit the cinemas on February 21, 2020. Directed by David S.F. Wilson, the film stars Vin Diesel, Toby Kebbell, and Sam Heughan.

The story of the movie is rather interesting as it revolves around the resurrection of Marine Ray Garrison (played by Vin Diesel).

Disney Movies’ fans are anxiously waiting for the release of Mulan. Based on the animated film by the same name that came out in 1998, Mulan is a war drama film. It is one of the most anticipated movies coming out in 2020. The story of the movie revolves around the prominent Chinese warrior Hua Mulan.

The movie stars Liu Yifei along with Jason Scott Li and Jet Li. The movie will release in the United States on March 27, 2020.

A fantasy film, Morbius is also based on the story of the comic character. The movie will release on July 31, 2020, and stars Jared Leto, Jared Harris and Matt Smith, to name a few. As a Marvel comics fan, you might want to subscribe to Contour TV or any other service to be able to watch the movie On-Demand after watching it once in the cinema.

Most Awaited Upcoming Movies in 2020

While the above list of movies states all the sequels and other interesting titles coming out in 2020, these are some of the movies people could most anxiously be waiting for.

An epic science fiction film based on the 1965 novel with the same name, Dune is going to be the first film in the two-part adaptation. This film will cover roughly the first part of the novel. The film will star Oscar Isaac, Jason Momoa, and Zendaya to name a few.

You can expect to watch the movie in the cinema across the States on December 18, 2020. However, it seems like a promising movie that you will continue watching o your Cable TV or online streaming platforms months after the release.

The Grudge is amongst many of the new movies coming out in 2020. The title will take many back to their childhood days. The noise would also resonate in many peoples’ ears (you know exactly what sound is being talked about). Starring Andrea Riseborough, John Cho, and Lin Shaye, the movie will come out on January 3, 2020.

A Quiet Place came out in 2018 and was a mystery and horror film that left anyone watching it thrilled. Well, the second part of the movie is set to release ion 2020. To be very exact, the date of release will be March 20th, next year. The film will star Emily Blunt, Noah Jupe, and Cillian Murphy, to name a few.

Starring Robert Downy Jr., Antonio Banderas, and Michael Sheen as live-action characters, Dolittle will be a rather interesting movie about a vet who discovers that he possesses the gift of talking to animals. Get ready to book yourself a seat in a cinema near you on January 17, 2020. It will be a nice break from all the Christmas movies you’d be watching for months.

If you are a sucker for Halloween movies, then this film should be on your list. It is an American slasher movie that will release on October 16th, 2020. The movie stars Jamie Lee, Nick Castle, and Judy Greer.

Of all the movies coming soon to theatres near you, Minamata has a somewhat unique story. It is a drama movie that will star Johnny Depp. The release date of the movie is not yet out. However, the story of the film revolves around a war photographer who decides to travel back to Japan.

There he documents the effects of the mercury poisoning that happened across the coastal communities. The effects were devastating. Trailer for the movie is still not out.

Scooby-Dooby-Doo, Where are You? Does the song ring a bell? The most exciting releases from the movies coming soon in the coming year are perhaps Scoob! The interesting part is that it is going to be a 3-D, animated film that will give many of you a chance to relive your childhood days.

The release date for the movie is May 15th, 2020. The cast for the film includes Zac Efron, Will Forte, Tracy Morgan, and Amanda Seyfried, to name a few. The trailer for the movie is still not out.

Army of the Dead

Post-Thanksgiving and Christmas, you might be up for watching some Zombie action. Well, Army of the Dead is set to release in 2020 and promises to scare you. The film will release on Netflix and the release date is still not out. The cast for the movie includes Dave Bautista, Theo Rossi, and Huma Qureshi.

Movies coming out in 2020 include some very interesting titles. Wonder Woman 1984 is one of those many titles that might excite people. Because Wonder Woman was a hit and people fell in love with Gal Gadot following the release of the movie. The film is set to release on June 5th, 2020. Apart from Gal Gadot, the movie also stars Robin Wright and Chris Pine.

Scheduled to release on June 26th, 2020, Top Gun: Maverick is an action drama film. It stars Tom Cruise, Jon Hamm, Ed Harris, to name a few. The movie is a sequel to the film Top Gun released in 1986.

I hope the list will get you all geared up for 2020. The films discussed in the blogs do not include documentaries. In case, you do not wish to watch the movies in a cinema, you can always wait for them to premiere on TV channels. And if you have access to Spectrum TV or the like, you can always take advantage of the On-Demand title option available.