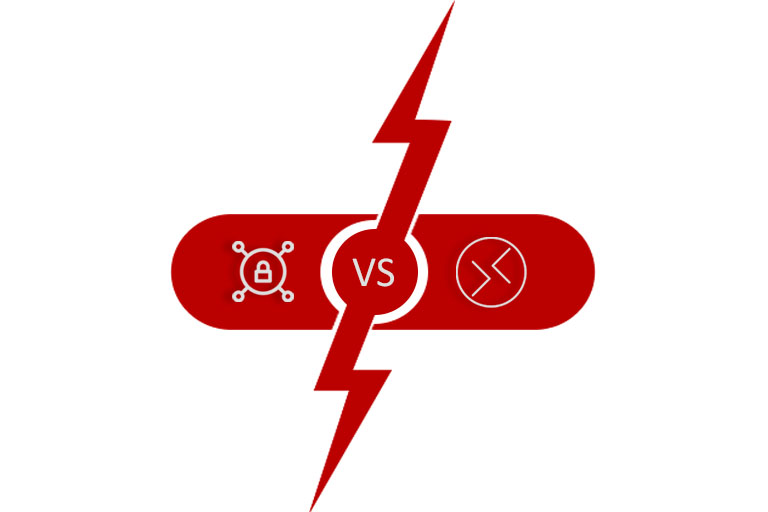 RDP and VPN are two different software. Both are methods of accessing resources located in a remote location. However, they are distinctive in what they allow you to access. Understanding what each solution does will help you decide which one you need.

Both applications provide access to something (server or device) located thousands of miles away. They may sound alike but they are very different. To understand how these program work let’s dig into this VPN vs RDP comparison together:

What is a VPN?

A VPN (Virtual Private Network), is similar to a small private network running on top of a large network. It connects a PC to the network as if the PC is a part of the network accessing email servers and drives. The connection, as a result, is strongly encrypted. In other words, it creates a secure tunnel to the user’s network to keep your data from prying eyes.

The VPN encrypts Internet traffic by routing it through an intermediary server. This encryption secures not just your data but hides your IP address along with the website you are accessing. In other words, no one can interfere in between your online browsing. This is a smart way to access content restricted in your region and securing your network at the same time.

An RDP (Remote Desktop Protocol) allows remote access and control to a specific PC in real-time and make changes like installing software.

It puts a user in direct control of the host’s device. The user’s PC broadcasts the screen of the host PC. The user can also access their computer files. These days, the latest RDPs are available allowing multiple users to join a remote session to control a device. One can control the host’s device even if they are a thousand miles away.

The first RDP was developed by Microsoft to allow its users to access the Windows desktop remotely. The primary purpose was to offer remote tech support or access a powerful machine for taking advantage of this software. Now, there’s no shortage of RDP apps.

How Do They Work?

Before you decide on the winner of this VPN vs Remote Desktop debate, you must know how each works.

Understanding the Working on a VPN

The encryption by the VPN hides information in such a way that it can’t be read without the encryption key. Only the VPN and the PC knows the key. If you are a frequent online shopper, use a VPN whenever you make a purchase. The VPN will render all your credentials unreadable till they reach the destination. This software makes your connection cyber secure.

Understanding the Working on an RDP

All you need is a good RDP to remotely access a PC no matter where you are. No additional hardware is necessary. The session begins when the client’s PC asks the host PC for permission to connect. Usually, a key is shared by the host PC for authentication. Once the remote session is verified, any keystrokes or moments made on the client PC take effect on the host’s PC.

The remote session does not begin without the permission of the host PC. So don’t worry about security. Now that telecommuting is in practice more than ever, many enterprises are using RDP programs to provide tech support.

What are the Types?

VPNs come in a variety of types such as:

These are the ones commonly used at home. An application is used for creating an encrypted connection. Even some small businesses use standalone VPNs.

A router enabled VPN lets you connect several devices connecting to the Internet at the same time. This saves the trouble of installing a separate VPN on each device. Plus, the router is always connected to the VPN even if you switch wireless Internet providers.

It’s the type of VPN designed for employees who work remotely. The remote workforce securely accesses the private intranet of the company by connecting to the VPN.

RDPs don’t usually come in types like VPNs do. However, each vendor offering RDP has its own set of unique features that make one software different from another. This is the only criterion so far for differentiating one RDP from another.

When it comes to security, VPNs are more secure in comparison with RDPs.

How secure a VPN depends on what eruption standard and transmission protocol it uses for transmitting data. The common types of protocol in VPN include:

Among these options, Internet Key Exchange Version 2 is the best protocol. It’s quite effective on mobile devices. RDPs are secure too. The remote sessions operate over encrypted channels to prevent a third party from intervening or viewing the session. The security of an RDP depends on the vendor and the encryption protocol in use.

Which One’s the Best?

This VPN vs Remote Desktop comparison has made it clear that both programs are not directly related to each other. These tools perform a different function but they require an Internet connection to function.

A VPN is ideal if you would like to make your Internet browsing private and secure. Even if you have the most reliable Internet providers, it still makes sense to use a VPN for added security. An RDP, on the other hand, provides remote access to another PC and have complete control over it.

To sum up, which tool to use depends on your personal need. If you are telecommuting, apart from having video conferencing tools in your tech stack, you most definitely need an RDP and a VPN as well.

What does VPN mean?

Yes, a VPN is safe. For a more secure connection, it’s best to use a premium VPN.

What does RDP mean?

Yes, but the level of encryption varies from one vendor to another.