What is a Safe Distance From a Wi-Fi Router? 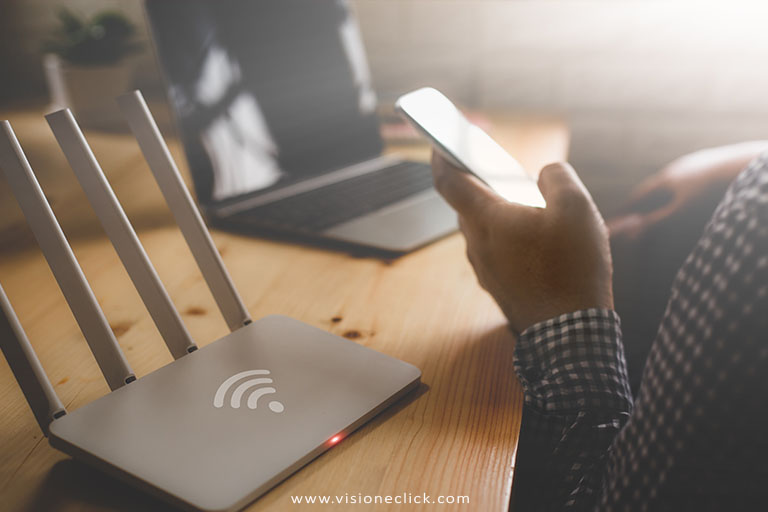 A wireless router has awarded us with convenience and flexibility that wired Internet couldn’t offer. The router uses radio waves to transfer data across a network. Shouldn’t we be maintaining a safe distance from the router then? Yes, we should!

Wi-Fi routers emit the same RF radiation emitted by microwave when we use it to cook food. If you are wondering about a safe level of radiation, there is none. However, the generally accepted safe distance from your router should be 3 to 6 microwatts per meter squared.

Sitting Close to a Wireless Router is Unhealthy!

It’s not recommended to sit close to a home Wi-Fi router. The radiations emitted by the device can add or remove an electron from an atom. They can change the atomic structure and cause damage to the living cell.

Wireless radiations can lead to several health issues starting from tumors to brain cancer. Here is a list of diseases these radiations are likely to cause:

Keep your phone in your pocket can cause infertility. The radiations don’t just affect the structure but functioning of DNA present in sperms. RFR can affect the growth and formation of sperms significantly causing male infertility.

Radiations disrupt the audacity too. We use the right ear more often for taking phone calls. The radiation from the device damage the internal ear and cause deafness.

Radiations influence blood pressure and disturb sleep patterns. They affect your cornea, retina, and lens making you sleep deprived. The radiations also activate receptors disturbing the biological rhythm of your body. Since your brain is active, you will have trouble sleeping.

As a result, you will feel tired and experience mood swings. Before bedtime, the switch of all wireless devices.

Wireless devices affect your mental wellbeing too. They make you anxious and cause depression. When people spend unnecessary hours on their wireless devices, it could result in personality disorders, bipolar disorder, and other mood swings. Uncontrolled screen-time can also cause an eating disorder.

If you have the habit of keeping your mobile device by your side even while you are asleep, it causes the body temperature to rise. Several cases of device blasting off because of overheating have been reported already. Overcharging, overheating and overuse of li-ion battery can cause a device to explode.

What are Safe Radiation Limits?

In most western countries, the safety limit of radiation exposure is between 100 and 350 watts per meter squared. Ideally, you should strive to get exposure between 3 to 6 microwatts. Unfortunately, a house with no devices emits this much radiation.

The good news is people have started to become aware of the dangers of radiation.  They are switching to low-frequency Wi-Fi routers that can transfer a limited amount of data.

Testing Your Router for Radiation

If you wish to test the amount of radiation your router emits, follow these steps:

As you move backward the radiation level will start reducing. As soon as the bar hits below 350 microwatts, this is your safe distance. The further you go away from this spot, the safer you will be. Now you know exactly where you should be sitting when using the Internet.

How to Reduce Wi-Fi Radiation?

It’s possible to reduce the radiation to ensure a healthy lifestyle and environment for everyone in the house:

Place it in the corner

Choose a centralized location for the router to ensure the best coverage and put in somewhere in the corner. It shouldn’t be kept in your bedroom. The key is to reduce exposure to radiation.

Turn it off when not in use

When you are not using the Wi-Fi, turn off the router and there won’t be any radiation. The best time to turn it off is when you are asleep.

Signal boosters make Wi-Fi faster but they also increase the radiation level in the house. Avoid using a booster. Limit the number of connected devices to ensure everyone connected to the router gets enough coverage.

Get a router cage

Wi-Fi router cages help block 95% of the radiation from the wireless router. They are safe to use and they don’t impact the signal strength at all.

Radiations are all around us. Some are controllable and some are not. Wi-Fi has become a part of our lifestyle so there’s no turning back from it. However, you can still keep your family and yourself from the dangers of radiation by following the measures discussed in this blog.

Don’t sit close to the wireless router or get boosters. Instead, invest in Wi-Fi 6 if speed is an issue. Keep a radiator measuring tool with you to measure a safe distance and make sure everyone follows it.

Whether it is your smartphone, Wi-Fi, or any other smart device, you will be safer the further you are away from the source of radiation.