Will the Internet Speed Increase Through Network Bridging? 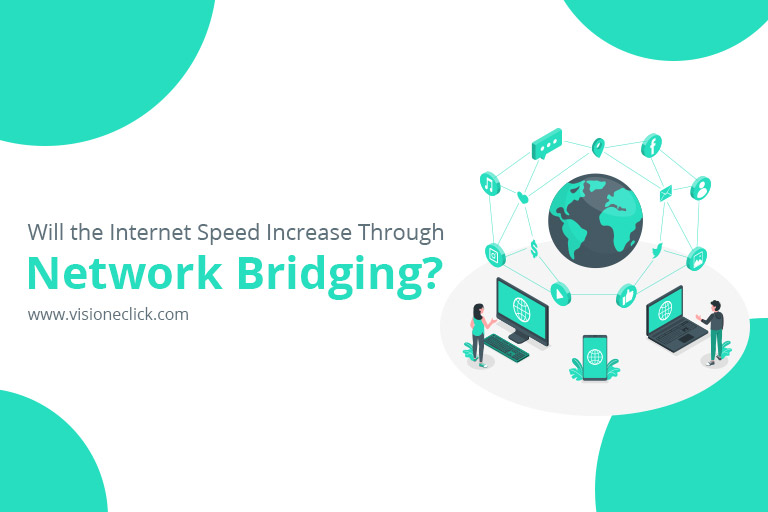 Internet users always crave higher speeds and anything that says “speedy connection” grabs their attention like nothing else. Even though most people know they can get more MBps by investing in high-speed data plans, they try different ways to boost their network speed. Not so surprisingly, these tricks and hacks eventually fail!

Network bridging is another way that became quite popular as a trick to increase one’s internet speed. Many people consider it a hack for speeding up their connection. But unfortunately, this too, like many others, doesn’t work. Also, you may notice some packet loss when you try to bridge your network.

If you have never done internet self-installation, you probably don’t know much about the concept of networks and how bridging works. So, before discussing why network bridging will not work, let’s first understand what it is.

A network bridge is a unique computer networking device that helps create an aggregate network emerging from different communication network segments. In more uncomplicated, layman terms, it is a unique process through which a particular computer bridges with another network segment.

However, you must remember that bridging is not routing. Most people confuse the two terms and use them simultaneously. You must understand that these are entirely different concepts, and here is the difference: even though both bridges and routers are devices to connect networks, their functions are quite unique. While a router takes the responsibility of finding short paths for a packet, a bridge does connect various devices in a single network. In contrast to bridging, routing connects devices across numerous different networks.

People frequently think that they can bridge various networks to gain high speed and stop their internet stuttering. Well, it might surprise many people, but network bridging is not the solution to your slow internet problems. Why? Because bridging makes use of two different outputs for two distant streams.

Here’s an example. Suppose you are using your connection to the server (let’s call it server A) for gaming over a router (let’s call it router A). You will then not get router B to server A, disallowing you to double your internet speed. It happens because your primary server (server A) wouldn’t decipher the process as the router and server A used the primary internet connection.

This example proves how direct connection or bridging will never work. However, don’t worry as there are some other ways to enhance your internet speed. One way is to have multiple and independent connections, like peer to peer, which lacks the main server.

Other Advantages of Bridging Networks

Even though it fails to speed up your connection, there are some other ways you can benefit. To start with bridging networks extend your current internet network like a repeater. A repeater is a network device that operates at an OSI model’s physical layer. These devices regenerate or amplify a signal before they re-transmit it, and you will also find them incorporated into networks for expansion of coverage area. Sometimes, you’ll see people calling them “signal boosters.”

By learning how to use network bridging the right way, you can dramatically lower collisions rates. A network collision happens when multiple devices are transmitting data over a single network at a time. If two different computers send data through the same network, their data end up colliding, and neither finishes the transmission process. You can reduce the chances of these collisions by properly implementing the concept of network bridging. Moreover, this particular technique gives you a lot of extra space for more bandwidth at every node of every network.

Network bridging connects different devices in a particular network, and even though it doesn’t serve the purpose of speeding up your connection, you can use it for several other perks. Now that you understand why bridging doesn’t have any relationship with your speed, it’s best not to blame it for lazy internet either. If you face difficulties with your connection speed, hit up your network company’s customer support, and ask for professional help. Till then, avoid trying out sketchy tricks off the internet without proper research. You never know what might end up doing more damage than benefit!